A chronology of key events:

1947 - British colonial rule over India ends. A largely Muslim state comprising East and West Pakistan is established, either side of India. The two provinces are separated from each other by more than 1,500 km of Indian territory.

1949 - The Awami League is established to campaign for East Pakistan's autonomy from West Pakistan.

1970 - The Awami League, under Sheikh Mujibur Rahman, wins an overwhelming election victory in East Pakistan. The government in West Pakistan refuses to recognise the results, leading to rioting. Cyclone hits East Pakistan - up to 500,000 people are killed.

Sheikh Mujibur Rahman was at the forefront of the struggle for independence from Pakistan.On way to free independent Bangladesh he visited  Indian Prime Minister Indira Gandhi

1971 - Sheikh Mujib arrested and taken to West Pakistan. In exile, Awami League leaders proclaim the independence of the province of East Pakistan on 26th March. The new country is called Bangladesh. Just under 10 million Bangladeshis flee to India as troops from West Pakistan are defeated with Indian assistance.

1972 - Sheikh Mujib returns, becomes prime minister. He begins a programme of nationalising key industries in an attempt to improve living standards, but with little success.

1974 - Severe floods devastate much of the grain crop, leading to an estimated 28,000 deaths. A national state of emergency is declared as political unrest grows.

1975 - Sheikh Mujib becomes president of Bangladesh. The political situation worsens. He is assassinated in a military coup in August. Martial law is imposed. 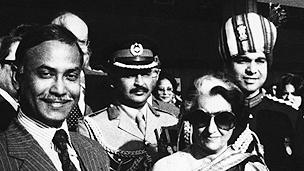 1977 - General Ziaur Rahman assumes the presidency. Islam is adopted in the constitution.

1981 - Zia is assassinated during abortive military coup. He is succeeded by Abdus Sattar. 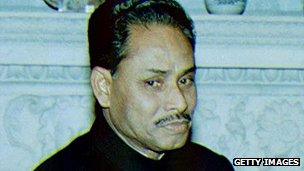 1986 - Parliamentary and presidential elections. Ershad elected to a five-year term. He lifts martial law and reinstates the constitution.

1987 - State of emergency declared after opposition demonstrations and strikes.

1988 - Islam becomes state religion. Floods cover up to three-quarters of the country. Tens of millions are made homeless.

1997 - Ershad is released from prison. The opposition BNP begins campaign of strikes against the government.

1998 - Two-thirds of the country devastated by the worst floods ever. Fifteen former army officers sentenced to death for involvement in assassination of President Mujib in 1975. 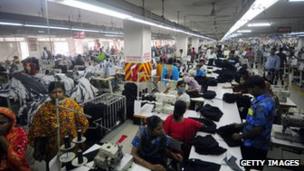 Garment exports are a mainstay of the economy

2000 December - Bangladesh expels Pakistani diplomat for comments on the 1971 war. The diplomat had put the number of dead at 26,000, whereas Bangladesh says nearly three million were killed. 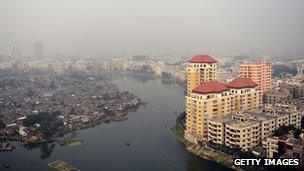 Dhaka: The capital is one of the world's most densely-populated cities

2001 June - Bomb kills 10 at Sunday mass at a Roman Catholic church in Baniarchar town. Bomb at Awami league office near Dhaka kills 22. Parliament approves bill providing protection for Hasina and her sister Sheikh Rehana, who feared that the killers of their father Mujib were out to get them too.

2001 July - Hasina steps down, hands power to caretaker authority, becoming the first prime minister in the country's history to complete a five-year term.

2001 September - At least eight people are killed and hundreds injured as two bombs explode at an election rally in south-western Bangladesh. 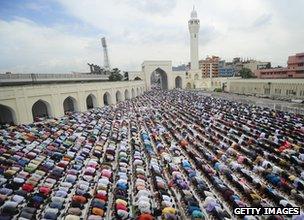 Islam was made the state religion in 1988

2002 May - Government orders tightening of safety standards after up to 500 people die when a river ferry goes down in a storm.

2002 December - Simultaneous bomb blasts in cinemas in a town north of Dhaka kill 17 and injure hundreds.

2004 Opposition calls 21 general strikes over the course of the year as part of a campaign to oust the government.

2004 May - Parliament amends constitution to reserve 45 seats for female MPs.

Bomb attack on Muslim shrine in north-eastern town of Sylhet kills two and injures UK high commissioner and 50 others.

2004 July onwards - Worst flooding in six years leaves nearly 800 people dead, millions homeless or stranded, and an estimated 20m in need of food aid. September's floods in Dhaka are said to be the worst in decades.

2005 January - Prominent Awami League politician Shah AMS Kibria is killed in a grenade attack at a political rally. The party calls a general strike in protest.

2005 17 August - Around 350 small bombs go off in towns and cities nationwide. Two people are killed and more than 100 are injured. A banned Islamic group claims responsibility. 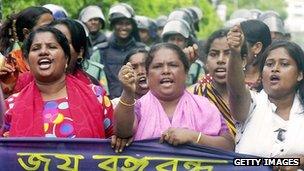 Political antagonism spilled over into the streets in 2006

2006 October - Violent protests over government's choice of a caretaker administration to take over when Premier Zia completes her term at the end of the month. President Ahmed steps in and assumes caretaker role for period leading to elections due in January 2007.

2007 January - A state of emergency is declared amid violence in the election run-up. President Ahmed postpones the poll. Fakhruddin Ahmed heads a caretaker administration.

2007 March - Six Islamist militants convicted of countrywide bomb attacks in 2005 are hanged. They include the leaders of Jagrata Muslim Janata Bangladesh and Jamaat-ul-Mujahideen.

2007 April - Sheikh Hasina is charged with murder. Begum Khaleda Zia is under virtual house arrest. Several other politicians are held in an anti-corruption drive.

2007 August - Government imposes a curfew on Dhaka and five other cities amid violent clashes between police and students demanding an end to emergency rule.

2008 June - Sheikh Hasina is temporarily freed to get medical treatment in the US.

2008 November - The authorities say general elections will be held on 18 December. Sheikh Hasina returns to lead her party in the poll.

2008 December - General elections: Awami League captures more than 250 of 300 seats in parliament. Sheikh Hasina is sworn in as prime minister in January.

2009 February - Around 74 people, mainly army officers, are killed in a mutiny in Dhaka by border guards unhappy with pay and conditions. Police arrest some 700 guards. A further 1,000 guards are detained in May.

2009 June - In a ruling on the decades-old dispute between two main political parties, the High Court decides that it was the father of PM Sheikh Hasina, and not late husband of her arch-rival Khaleda Zia, who proclaimed independence from Pakistan in 1971.

2009 October - The government bans the local branch of the global Islamist organisation Hizb-ut Tahrir, saying it poses a threat to peace.

2012 January - Army says it has foiled a coup planned by "fanatical officers".

2012 May-June - Key figures from the main Islamist party Jamaat-e-Islami, including leader Motiur Rahman Nizami, are charged with war crimes by a government tribunal investigating alleged collaboration with Pakistan during the 1971 independence struggle. Jaamat-e Islami supporters clash with police repeatedly in following months in protest at the trial.

2012 October - Muslim rioters attack Buddhist villages and shrines in south-east Bangladesh after an image said to show a burnt Koran was posted on Facebook. The government denounces the attacks as "premeditated and deliberate acts of communal violence against a minority".

2013 January - War crimes tribunal sentences prominent Muslim cleric Abul Kalam Azad to death for crimes against humanity during the 1971 independence war. He was tried in absentia, as he had fled abroad.

2013 May - European retailers promise to sign an accord to improve safety conditions in factories after a garment factory building collapsed in April, killing more than 1,100 people. Worker protests close hundreds of factories and extract a government pledge to raise the minimum wage and make it easier to form unions.

2013 July - At least two people are killed as police clash with thousands of protesters after the conviction of Ghulam Azam, leader of the Jamaat-e-Islami party, for war crimes committed during the 1971 war of independence. Ghulam Azam dies in October 2014.

2013 November - Opposition Bangladesh Nationalist Party and Jamaat-e-Islami supporters clash with police in protests at the government's refusal to make way for a caretaker administration to oversee parliamentary elections in January, as is the usual custom.

2013 December - Supreme Court upholds death sentence on Islamist leader Abdul Kader Mullah of the Jamaat-e-Islami party, who was convicted in February of crimes against humanity during the 1971 war of independence.

2014 March - Khaleda Zia and other BNP opposition leaders sent for trial in April on corruption charges over alleged embezzlement of charitable funds.

2014 October - Jamaat-e-Islami Leader Motiur Rahman Nizami and another leading figure, Mir Quasem Ali, are latest party officials to be found guilty of war crimes committed during independence war in 1971. Both face death sentences, and another death sentence is upheld on senior party official Mohammad Kamaruzzaman, who was sentenced in May 2013. Critics say government using tribunal to target opponents.

2015 February - Khaleda Zia and 55 others charged with instigating arson attack on a bus that killed seven people. She and BNP deny charges, condemn violence.